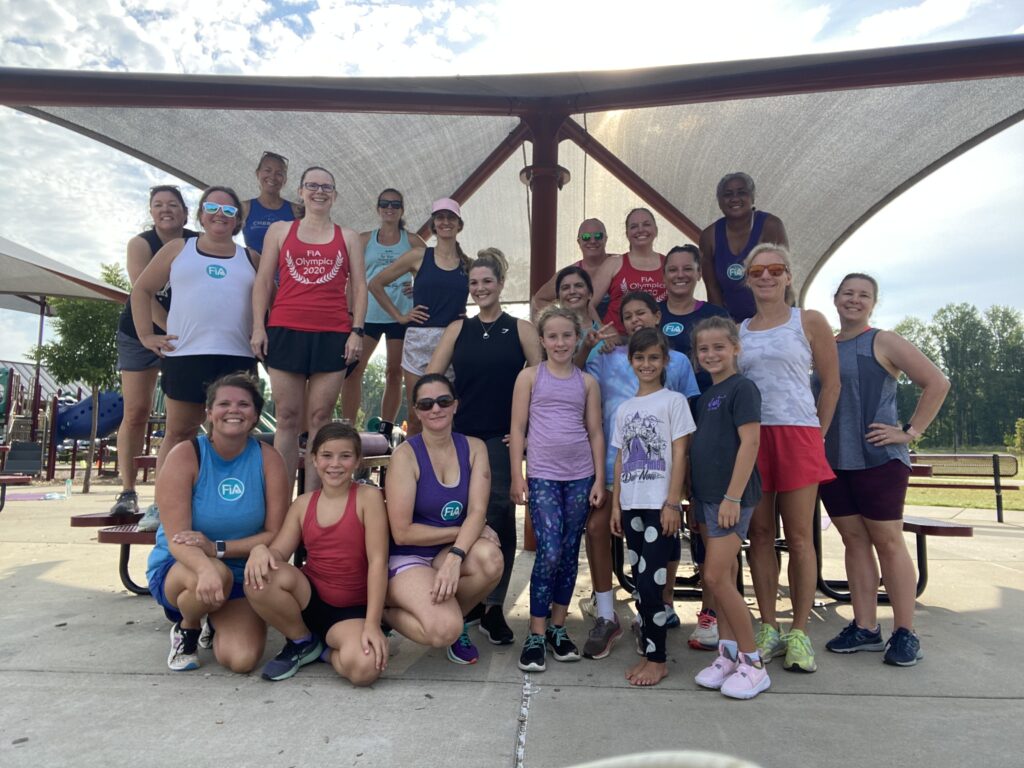 Let the games begin! 22 lovely FiAs and 2.0s converged on a hot and humid Saturday morning to kick off FiA Olympics Week 2022! We had a lot do so we quickly did a CoT and NoR and got started!

Lexirades – We broke up into 2 teams. Each team had a bowl of 20 exercises from the FiA Nation lexicon. Some of them we know, some we know by a different name, and some we had to think a little harder to remember. Both teams finished within a word of each other.

3 min froggers – A frogger exercise is done by starting in the plank position and you jump your feet to the outside of your hands, then back to the plank position. That’s 1 rep. This event was to see who could do the highest count in 3 min. Hallmark crushed this event by getting 145!!!!!

Obstacle Course – Split up into 4 teams this time and 2 against 2.  The course was set up with 6 cones. To start you had to bear crawl to the first cone and then do 5 squats. Run to the next and do 10 jump ropes. Run to next cone where there were 3 slam balls with different weights. You could choose which weight you wanted. If you choose the 15 lb you did 1 ball slam. 10 lb was 2, and 5 lb was 3. Run to the next cone and you did 10 hillbillies. Run the next and do 5 step ups. Then run to the finish. We did it relay style and when the 1st person got to the 1st cone then the next person on the team would take off. The first 2 teams to race finished neck and neck. The 2.0s wanted to be together so they competed against the ladies and they gave them a run for their money. Those 2.0s can bear crawl like nobody’s business!

Camera Hot Potato – time for a breather! We took some to catch our breath and played the always fun selfie hot potato game. We grouped up and one person has a cell phone and puts it in selfie mode and sets the timer. Then you pass the phone around and whoever it’s on when the timer expires and takes the pic, is out! So on until you have 1 person left! Always a fun game to play!

5 min BGSU – self explanatory. Most sit-ups in 5 min. We partnered up so that we all had a foot holder and counter. Straight Shooter took the honor of most sit-ups with 133! Incredible. Also a shout out to Partly Cloudy who came in a very close second with 125. Way to push yourselves ladies!!!

After we finished up the last event we circled up for a our picture and enjoyed some wonderful goodies, coffee, and fellowship. Thank you for bringing all the yummy breakfast snacks and treats!

We also took a moment to name Addy – Hallmarks 2.0, who had never been given a FiA name! She will now be known as Hoops because of her love of basketball.

It was a super fun morning full of laughs, lots of sweat, and smiles. Have an amazing time this week enjoying all the rest of the events!