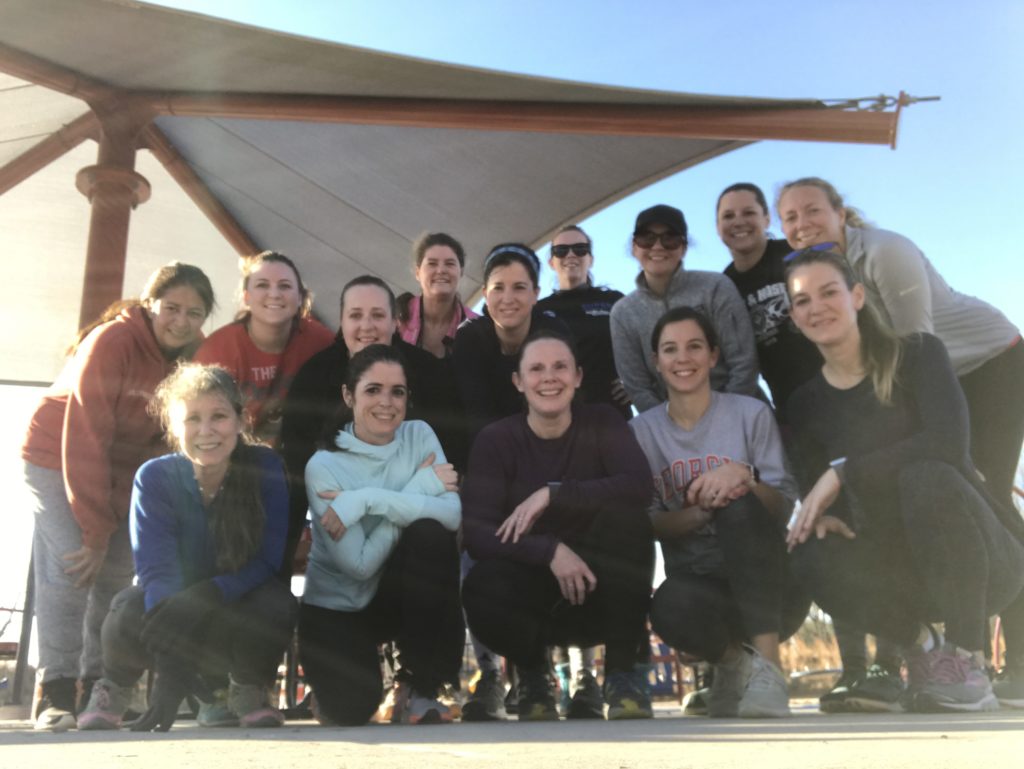 15 PAX at Foxtrot on Saturday!  We had a special guest, 2.0 Book Worm, that led us through a fun little warm up.  She does competitive gymnastics and her coach Sergei sure knows a thing or two about conditioning.  She she took us through her usual warm up and a couple of games.

First, we lined up tallest to smallest.  Then we ran 15 laps around a square, marked with cones, that was about the same size as the floor routine area at gym.  The tallest led us, no passing aloud, and kept count.  Those 15 laps were no joke!

Next we played the yoga mat game.  We laid several yoga mats into the center of the square.  Book worm called out numbers and PAX would run to a mat. Whatever number she called was the number of PAX needed on the mat to stay in the game.  If you didn’t have the right number or didn’t make it on a mat, you are out.  Those that were out had to do Toy Soldiers, Hillbillies, and Crockpot Squats.  We played that game twice.  It always results in a lot of laughter.

Next, we played ships and sailors.  Another gym favorite.  Book Worm called out instructions, which told PAX to run to a line of the square or do exercises.  Last one to the right line was out and had to do exercises.
Cookie – run left

This also resulted in a lot of laughter!  As Pax got out, they completed Hallelujahs and Touch N Hops.

That concludes Book Worms portion of the Beatdown.  Thank you for letting her lead you.  She really, really enjoyed it.

Next up was a loaded Dora.  We partnered up.  One PAX runs, the other completed reps.  Then they switch and complete reps cumulatively.

I had a 500 in there, but we didn’t get to it.  The Tricep Kickbacks did everyone in.  This workout was a ton of steps and a great calorie burn.  My watch said 550 calories and almost 8,000 steps!  Everyone check off that Dora Bingo Box, you killed it!

Anouncements – we have some FiAlanthropy opportunities going.  Bring unwrapped toys for children in the hospital to Straight Shooter or Wonder Woman THIS week.  They are rucking them to CHOA next Saturday.
Sign up on the Sign Up Genius to help sponsor a family in need, right here in our community.  They have 3 small boys.  Let’s give them a Christmas!