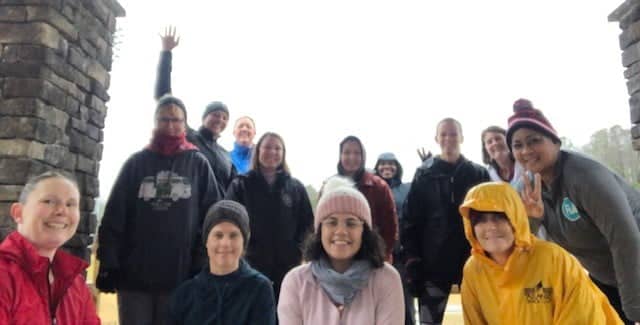 Today I learned or remembered a few things.  1.  There was a race at Foxtrot that I wasn’t aware of that kept us from going to the tennis courts due to the weather.  2.  I look like a drowned rat after working out in the rain for an hour.  3.  My FiA sisters showed up and showed out.  I had to think on my feet and change up my Q a little since the weather didn’t cooperate and we were sent to the snack shack.  I had hoped that my radar and weather prediction was wrong but alas it wasn’t.  We did some light stretches and then did the Cupid Shuffle.  I’m rhythmically challenged so I’m sure this was entertaining.  I was trying to count the beats in my head so I didn’t pay attention to how everyone else looked.  We did the whole radio version of the song and it was long.

Next was the thang.  I had found several corny Valentine’s sayings and put some exercises with them.  Hopefully this comes thru easily readable as I’m copying and pasting from my spreadsheet.  Yes, I have a spreadsheet of this.

Next we did a tabata of 50 seconds on & 10 seconds rest of the following words:

Lastly we did the cupid shuffle plank edition, took 1 last lap, and did some light stretching before circling up and naming our FNG Nature as she enjoys running and being in the mountains.  Thank you all who showed up on this rainy, cool morning.