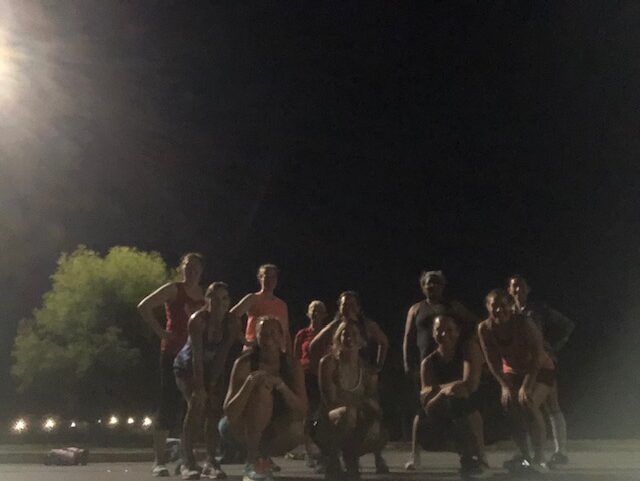 The FiA Olympics Team Events were held today at Foxtrot. A total of 11 PAX came out to participate in 4 events and had a great time on this cooler morning. We warmed up with some arm circles, Through The Tunnel IC, some jump ropes and jacks while I explained what we would be doing and shared the disclaimer for our FNG. We then did an Indian Run where folks shared their favorite olympic team sport.

The Thang – with 10 PAX competing (I was taking pictures and organizing things so I was a spectator today), we broke into 2 teams of 5 PAX each. For each event the teams mixed up some to create new teams of 5.

Event 1 – Bear Crawl Relay
For this one, each team counted off 1 to 5, which designated their number in the rotation through this relay. Pax 1 started it off and bear crawled about 10 yards to Pax 2 (middle station) who then bear crawled to Pax 3 (far station), who then came back the other direction to Pax 4 (middle station), who then crawled to the start line where Pax 5 crawled to the middle which was then the finish line (imagine you’re watching a swimming relay and the next swimmers would start once the teammate touched the wall, it was kinda like that).
We did this one twice because the first heat saw a photo finish between Rise up and Killa coming from behind to possibly take it for her team.

Event 4 – Leaky Cup race
The Pax seemed like they kept the same teams for this final event. Each Pax was given a cup with a hole in the bottom. One person from each team would run down to a bucket filled with water, fill the leaky cup and try to get back to the starting line to pour the water into the team cup. Then the next Pax would run down, fill her cup, and run back to pour into the team cup, and so on. I guess I had not made the holes big enough so after the first team cup was filled really fast, we switched to counting full cups of water. The winning team was able to fill the team cup 7 times and the opposing team had 6 when time was called.

We finished our morning with COT, prayed, and named our FNG. Welcome to Semper Fi who is Wonder Woman’s sister-in-law!