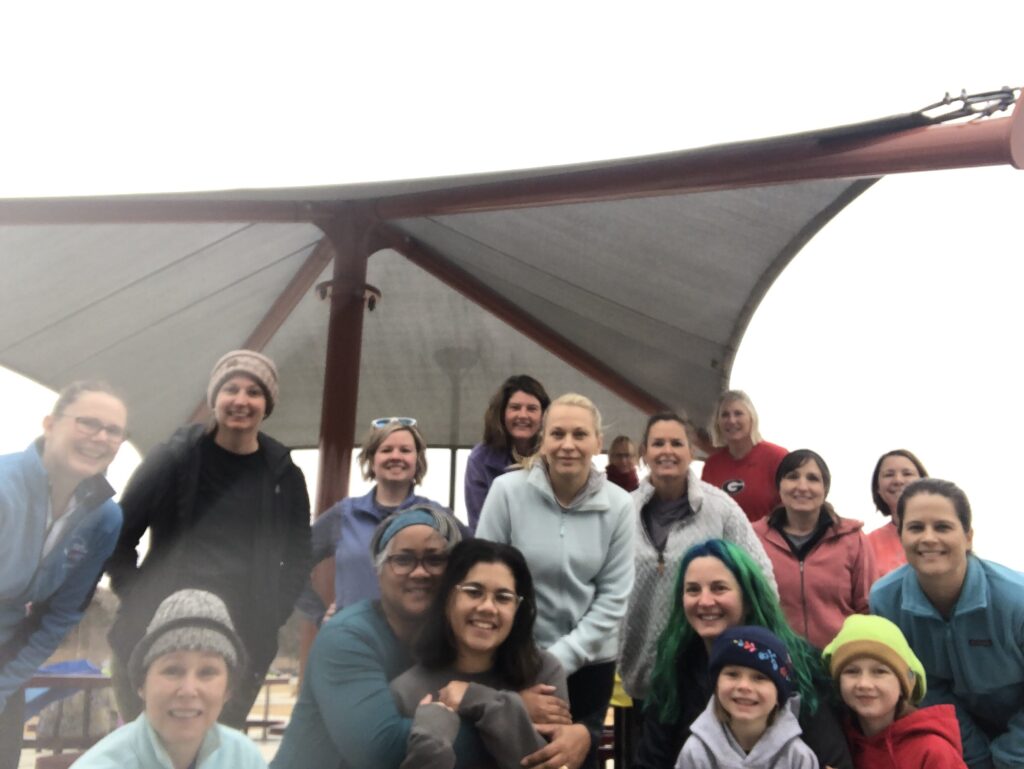 14 beautiful ladies met me this morning to work on our basketball bracket for March Madness.  We found some of us have better basketball skills than others.  The weather was a little cool but we will take that over cold any day.  It was overcast but at least it wasn’t raining.  We started with a few static stretches and then we did some fake dribble, dribble, shoot exercises.  Next we broke into groups of 3 or 4 for the basketball brackets (pictured below).

I gave each team a clipboard with the bracket of exercises drawn out into sections of arms, abs, cardio, and legs.  Each team received a trash can (basketball goal) and a tennis ball (basketball).  The far columns of the bracket each had 16 exercises.  You did 10 of each in those columns and if considered a set then you did sets.  Every two exercises were paired against each other.  When you finished the 2 someone would try to throw the ball into the trash can from a short distance away.  If you got the ball in, then the first exercise won and made it into the next column of the bracket.  If you didn’t make the shot then the second exercise moved on.  After each column you ran a lap.  For the second round of brackets you did quantity 15 each as there were only half of the exercises from the first round.  You kept going thru each column and would up your quantity by 5.  We started to get short on time so we took out some of the laps and my group started doing each instead of sets so we could finish right at the end.  Flutter kicks were our champions.  I think we ran out of time for the rest of the groups to get a winner.

Everyone knows that I have no creativity so I did not create this beatdown.  I borrowed it from FiA Hampton in Virginia and changed it up a bit.  I think everyone had fun.

We circled up for COT, prayers, and named our new FNG Chrissy Bulldawg.  Welcome and we hope you come back to join us.  We had a quick Coffeteria before the Bible Study started for the day.