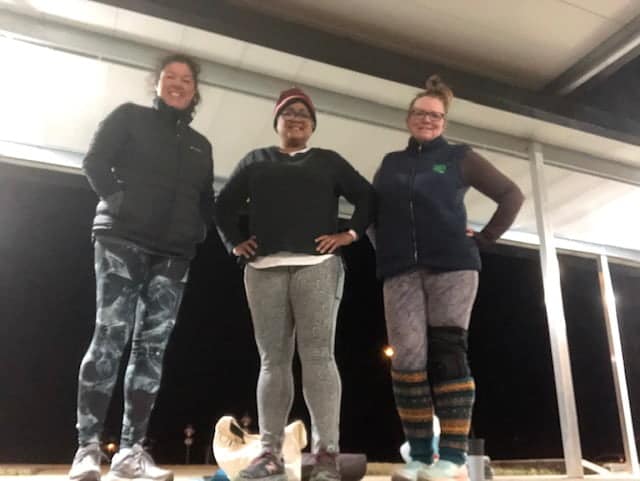 I had two amazing women join me this morning for the National Pastry Day beatdown. It was COLD this morning so I tried to warm us up fast with the Christmas Can-Can. It’s a surefire way to get the heart rate up! We did some other arm circles and stretches before we jumped into the Thang as well.

The Thang – I decided that a tabata timer was the way to go for this one. The goal was to burn enough calories to eat at least one pastry today if PAX wanted to. I ordered things on the board with a rough estimate of fewest to highest calories (at least according to the internet). I set the timer for 1:00 minute on and 10 seconds to switch to the next exercise. There were 8 exercises for each round labeled with a yummy pastry, two for arms, two for legs, two for abs, and two for cardio. At the end of each round we ran a big lap and did 3 rounds today. For the first round the PAX followed the exercises written in blue, the 2nd round was green, and then the third round was PAX choice of either the blue or green exercise for each pastry. Here is the chart

Croissant – Round 1 – skaters; Round 2 – crockpot squats; Round 3 – PAX choice of skaters or squats

Baklava – Round 1 – squat with kick back; Round 2 – donkey kick with pulse x3 (PAX alternated legs as they chose); Round 3 – Pax choice

According to Bourbon’s watch we burned enough calories to have 2 doughnuts today or 1 eclair or maybe one little bite of each pastry. Thanks for joining me girls! Love ya!