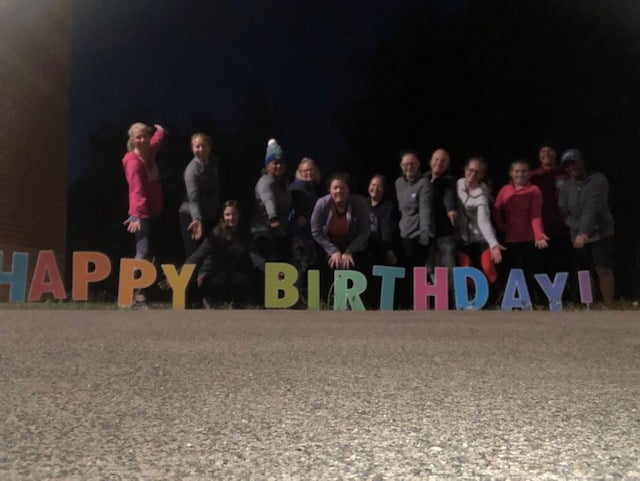 I had created this one for a beatdown that got canceled due to storms, so it was supposed to be Tabata in the Rain but it became Tabata in the Cold! Crazy to have 40 degrees -ish on my birthday! Semper Fi and Partly Cloudy joined me for some early steps and as 5:30 approached the awesome crew was rolling in!

We warmed up with some arm circles, toy soldiers IC, gorilla swings, and stretches. We then did the song challenge “Bang” (hillbillies during verses and jumping jacks when he says Bang).

The Thang – I created 5 rounds of 4 exercises each, and each exercise was performed for 1 minute with 10 seconds in between. At the end of each lap we took a small lap to keep our heart rates up. Here are the rounds:

There wasn’t time to do the canon blast so I’ll save it for next time! We ended a few minutes early because the amazing Pax decided it would be good to celebrate my birthday. I felt so blessed by all the things, from yummy breakfast treats to the birthday gifts. You all spoiled me today! My heart is full to overflowing! Love you all so much!