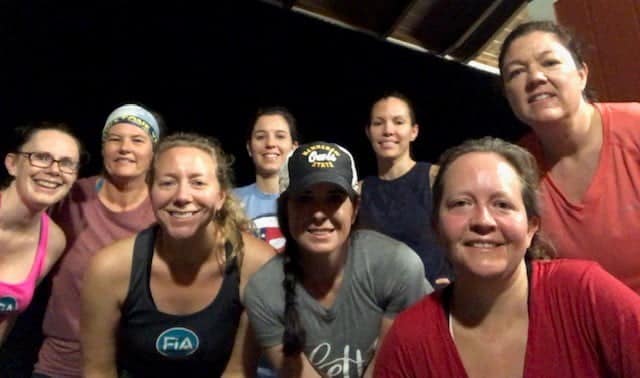 This morning was still a little rainy and since it has rained LOTS the last few days I tried coming up with a workout where we wouldn’t have to get ourselves or our mats wet.  The temperature was on the warm side for January and it did mist on us just a little towards the end but that just helped us cool off after getting so warm during the beatdown.  We had to start out in the dark again as the lights didn’t kick on until about 5:32.

We had 7 exercises in which we did 7 reps of each before taking a lap around the snack shack.  We made the run a little longer than our normal loop around the snack shack but we didn’t run down to the football field and back like we have done before.  We did 7 sets of the exercises as most of them you needed to do both left & right on.  We did this 7 times hence the Wall of Jericho.

2 Lunge ab twist – down down into a lunge, holding arms straight out and twist towards the knee that is lunging

We ended with 30 calf raises & 50 squats before stretching.

We named prayer requests, prayed, name o rama and went on with our day.

Don’t forget to sign up for the CSAUP event: https://www.goneforarun.com/virtual-race-she-believed-she-could-4-miler-2020/tr-41952.html?cgid=gfar#start=1

Also for FiAlanthrophy we are collecting feminine hygiene products into February. Bring them to a beatdown and check off a Bingo Box.