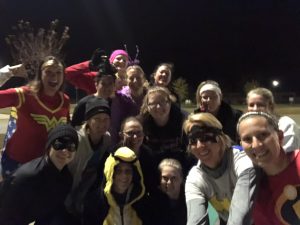 16 PAX came out early on Halloween Eve morning to Trick or Treat! AND IN COSTUME! We started with a quick warm up IC with jumping jacks, arm circles, and through the tunnel. We had 16 cones set up in a large oval with “Costume Cards” at each cone. We all started together with Snow White, and then we rotated through each station at our own pace!  It may have been slightly more fun than work, but it was a great way to kick off the festivities of Halloween!

Sevens! Dumbell  Swings and Bicep Curl to Shoulder Press and then run a lap around the trick or treat oval.

Jack and the Beanstalk

31 Stir the Pot (laying on side, top leg makes circles)

31 Catchers to plank (squat to plank)

We pushed it to the last minute so we could get in as many stations as possible! We needed a full hour to get through them all- but we still had fun packing as much as we could into those 45 minutes! We circled up and welcomed our UGA loving FNG, Ashley, and rightfully named her Bulldog!

When the Flock Lands for 5k + Fun