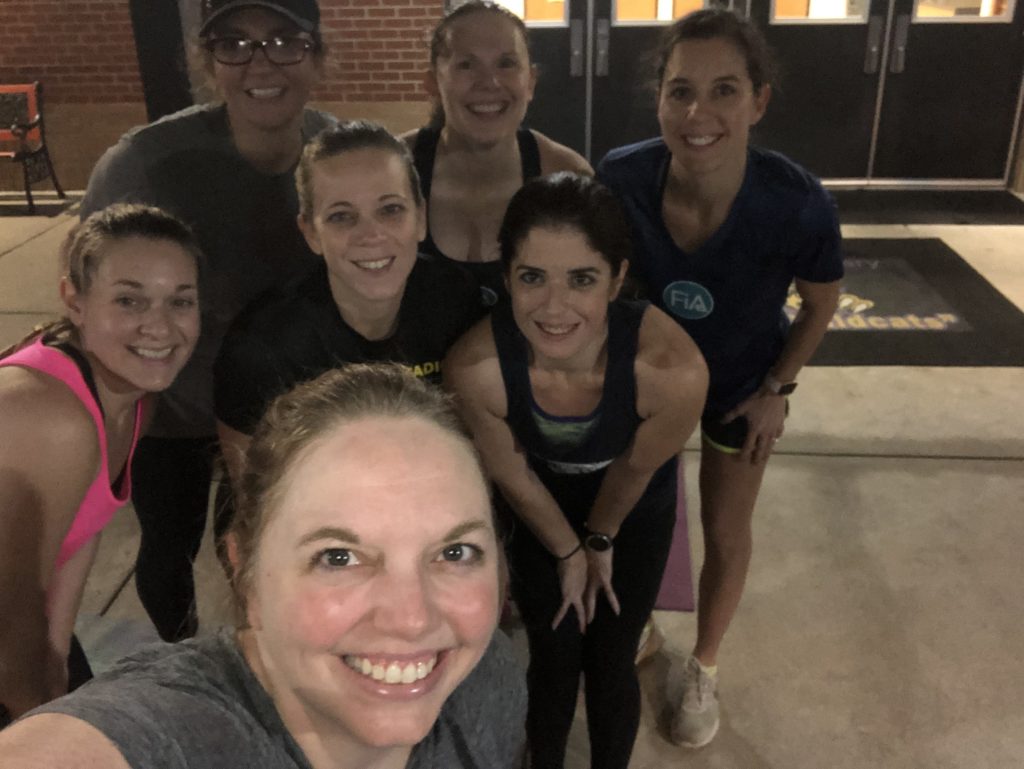 Seven PAX showed up to the Lair this foggy morning to get our sweat on and for my very first Q! It was humid, but at least it wasn’t raining like the forecast showed last night. Thankfully the rain held off because we would have been soaked doing this workout! I used this beatdown from Partly Cloudy because it was the first one I ever did with FIA.

We did some ring of fires, warm up edition. We started with arm circles and pass around 5 jumping jacks. We then did leg swings and passed around 5 star jumps. Last but not least, we did windmills (after I realized I was doing it wrong) and passed 10 butt kicks.

We ran to the first corner and did 5 jump squat holds. After each jump squat we would hold chair for a few seconds.

We ran to the second corner and did 10 Moroccan Nightclubs, 10 Randys, and 20 Hallelujahs.

The third corner we burned out our legs some more with 5 static lunges for each leg.

The fourth and final corner was were our mats were placed. We jogged to our mat and did 5 Carolina Dry Docks and then straight into 5 crab cakes.

We held plank until everyone finished. We continued four corners with another 3 rounds but our reps increased with each round. The first, third, and fourth corner we increased reps by 5 each time and the second corner reps increased by 10. So the reps looked like this:

After four corners was done we circled up and did a not so easy ring of fires for our arms. We started with bicep curls and passed 8 Side extensions. Next was tricep kick backs, passing around 8 front extensions. After those went around the circle we started overhead press and passed 10 overhead tricep extensions. Finally, we could drop our weights and started doing chicken wings while passing 10 scarecrows.

We took a quick picture since a couple FIA’s had to leave early then the rest of us hit our mats for some killer abs. We did 30 LBC’s, bicycles, Russian twists, and in and outs.

We had a few minutes for stretching and then circled up for COT, prayers and name-o-rama. We finished with a 2 minutes to spare. I’m so thankful for all you ladies that showed up for my VQ! It wouldn’t have been the same without ya!