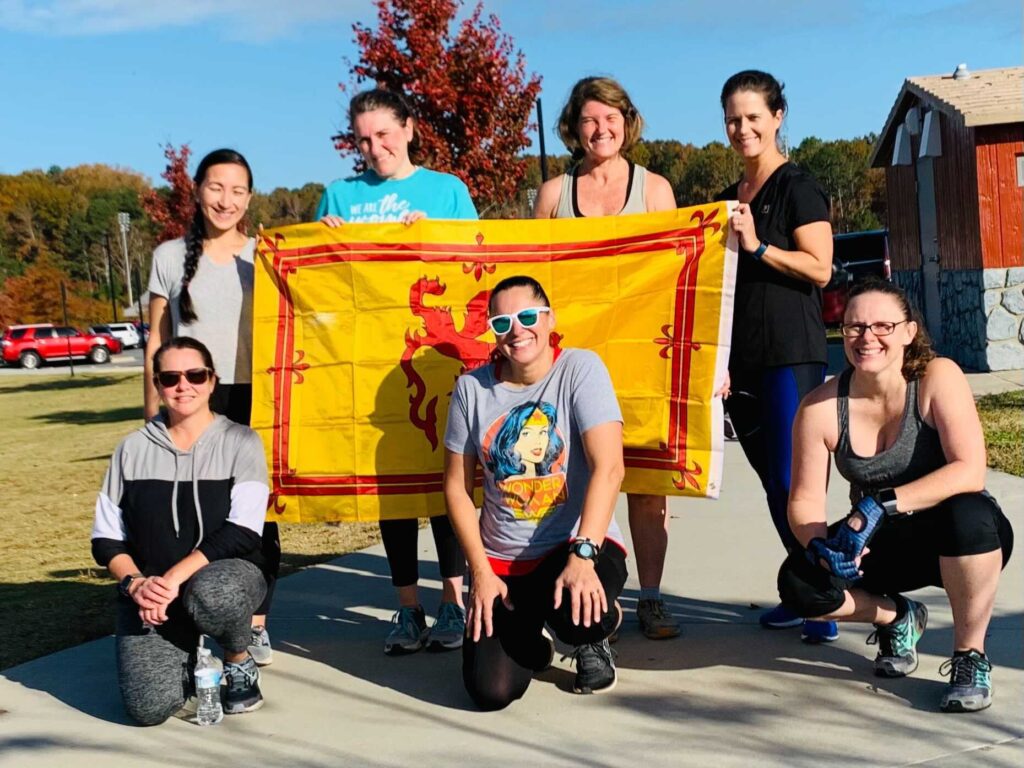 Another beautiful day for beat down.

We started by hanging the ‘Lion Rampant’, a national Scottish flag, to set the scene. The beat down started with Scottish knowledge multiple choice questions, every wrong answer were valued at 10 knee ups every right answer was valued at 10 jumping jacks.

Scottish pipe band music was played and we formed a circle, 10 side strides to the right then to the left then, highland jig for 10. This was repeated until the song was over.

Let the games begin; Every FIA was assigned an exercise and this was taped to the back of their shirt. There were four stations set up around the big circle, the first station was the stone toss, as one FIA Tossed the stone as far as they could, the rest did the exercise pinned on her back. We rotated around so everyone had a chance to throw The Stone and everyone had a chance to do the exercise pinned on her back.

We ran to the next station, the Kettlebell station. Here each FIA when it was their turn carried either a 10 pound or 5 pound kettlebell in each hand and ran around a ball down the field and back, everyone else did the exercise on her back, we rotated so everybody had a chance to carry the bells.

We ran to the next station. The station was a series of exercises which we all did together, first we crab walked, then Long jumped, then bear crawled from point A to point B.

We ran to the final station which was the Caber Toss. The caber consisted of a long PVC pipe which was tossed in the air. The object was to bounce the caber off the ground and for it to land in the 12 o’clock position. We had some awesome tries and some that landed perfectly. Everybody else was doing the exercise on the FIA’s back.

These four stations were completed twice then we Finished off with an Indian run with everyone telling us what they are grateful for.

There were Scottish biscuits and treats as well as coffee to finish up.

We had a new FNG to name, And since she is an avid tennis player we named her Love.

Thank you FIAs for making this better than I could’ve hoped. What fun!